I am guessing that subscribers are getting tired of me apologizing for taking so long to edit. There’s been a lot going on since these episodes were recorded. A lot. If you don’t already know, then you can find out about it in the next episode.  At any rate, I won’t be apologizing for the lateness to you subscribers for this episode, but I WILL apologize to our guest, Fatimaah-Joso Menefee. After our blackface episode (episode 3 of this season) aired, she took it upon herself to send us a critical email, where she was very appreciative that we decided to speak on the subject, but pointed out areas we were lacking in knowledge. This led to a back and forth email discussion, and we decided to invite her on the show.

But naturally, because of scheduling issues, it was not to be. She did however record her voice for us and we made a mini-episode about that. 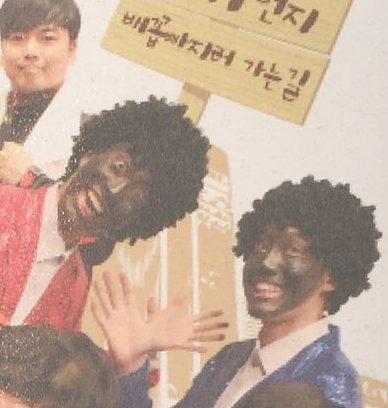 From the program for the Busan International Comedy Festival. Picture Shamelessly Stolen from Brothas&Sistas of South Korea Facebook Group.

Also in this episode at the end, I mentioned that the Facebook group Brothas&Sistas of South Korea protested an event in Busan that was featuring blackface skits, and were successful on having the blackface removed. The exact details were unknown at the time of recording, but here is a link to the post which details exactly what occurred.